The definitive guide to hangovers.

Hangovers are quite possibly the worst human affliction that we gladly bring on ourselves, yet we still get caught up with a drink or three too many the night before. We’ve all paid the price the next morning with a doozy of a hangover that makes us profess: “I’ll never drink again!” They’ve even made movies about epic hangovers!

But with all of our modern technology and medical advancements, we still don’t know exactly what causes a hangover and how to prevent it. (Other than not drinking too much the night before, of course.) But scientists have contributed a fancy name for the common hangover: veisalgia. I’m sure the person who finally discovers a hangover cure will be elected Person Of The Year and become a billionaire the same day, but until then what we do have is a collection of solid medical advice, urban legends about drinking, and studies, which often conflict.

How does alcohol work in your body?

Basically, when you drink too much alcohol, your body has ingested more ethanol (the active ingredient in booze that makes you intoxicated) than your body can process.

Three theories of why you get a hangover:

The common belief among the medical community is that a hangover is a function of alcohol throwing your natural balance of chemicals out of whack. One theory states that to process alcohol, your body is required to convert the enzyme NAD+ into a different form, called NADH. When NAD+ builds up and NADH is depleted, your cells’ ability to absorb glucose from the blood to regulate electrolyte levels is inhibited. But even this theory is yet to be proven empirically.

A popular current theory is that hangovers actually come from a buildup of the toxic compound, acetaldehyde, which is 10-30 times more toxic than alcohol itself. So when you drink and your body processes alcohol, acetaldehyde is the first toxin released and the lingering effects cause sweating, skin flushing, nausea and vomiting.

Another theory speculates that hangovers result because alcohol reduces your immune system, leaving your body in a shell-shocked state with flu-like symptoms as if you were fighting off an illness. Research has found a strong correlation between high levels of cytokines (immune system signaling molecules) and hangovers. 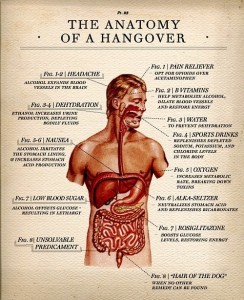 Why are hangovers worse for some people?

We’ve all had friends who could drink all night long and feel fine the next morning, while we only have a few adult beverages and feel terrible. Scientists think that genetics play a large role in how profoundly alcohol affects different people the next day. Some people have a mutation in their genes for the enzyme alcohol dehysrogenase that alters their ability to process and then convert acetaldehyde into acetic acid. Excessive buildup of the former causes bigger hangovers, or even reactions as they’re drinking. This gene mutation can be witnessed especially in some East Asian people, who suffer from “Asian flush” when they drink.

Women have also been found to suffer the effects of alcohol more acutely – both the night of imbibing and the morning after – but of course, this can be dismissed as a function of them having lower body weights then men. It’s also rumored that hangovers get worse the older you get, but no studies or research have proven it (though it still feels true!).

There’s no evidence that mixing different types of alcohols make you more inebriated (it’s alcohol that makes you drunk, no matter how it’s delivered!). But some studies claim that alcohols concentrated in smaller volumes (like mixed drinks instead of beer, and shots) have higher levels of chemicals called congeners that contribute to hangovers.

Does vodka gives you less of a hangover than other alcohol?

I’ve heard a lot of partygoers swear by this one, but it’s still a point of debate, even among scientists. On one hand, they say vodka essentially contains water and ethanol, which is the true cause of hangovers, so there is no difference between a hangover from vodka or whiskey.

But then other studies have shown that darker-color liquors like rum, whiskey, or bourbon contain high levels of congeners, while vodka and clear liquors contained none. A study in the Netherland found that one particular congener called methanol lingers in the body much longer after alcohol is consumed, and that is most prevalent in whiskeys and red wine. But that evidence is a shaky at best. Most likely the truth lies somewhere in the middle, where those congeners in darker liquors help prolong a hangover but the alcohol is doing most of the damage, just like vodka.

Is it true that a hangover is just dehydration?

Most people think that a hangover is mostly caused by dehydration, but that’s not the case. While alcohol is a diuretic and been found to cause very minor dehydration, that’s not the reason you feel so awful the next day. (If that was the case, you could chug a lot of water and feel better instantly!) In fact, studies have shown no correlation between high levels of dehydration and severity of a hangover.

What are some hangover remedies that won’t work?

Some people sell Vitamin B or vitamin packs that claim to cure hangovers, but vitamins have been shown to have no effect. The same is true of caffeine, which may make you feel more alert but won’t help your hangover.

A lot of people think (erroneously) that consuming alcohol depletes your electrolytes so you should drink Gatorade the next day, but that’s been disproven. 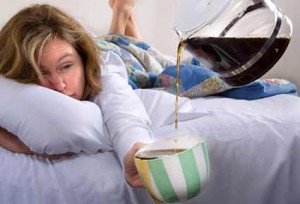 What are some legitimate hangover cures?

It’s important to understand there are really no ways to “cure” a hangover after the fact, but you can treat the individual symptoms like headaches, nausea, dehydration, etc.

You can buy over-the-counter non-steroidal anti-inflammatories like aspirin, Advil, and ibuprofen to treat headaches and other discomfort. Tums or Pepto-Bismol should help a nauseas stomach.

But you should never take Tylenol for a hangover because it contains acetaminophen, which is toxic and magnified when the liver is processing alcohol.

Other than that, get lots of rest, drink plenty of water in case you are dehydrated, and eat some good food.

Some people like to exercise when they are hung-over with the thinking that they will “sweat out” the alcohol in their system, but that’s not the case. However, exercise always makes you feel better because of the endorphins released and you’ll be burning off calories from drinks the night before.

What are some natural or alternative remedies?

People have tried many things to alleviate hangovers and swear they work, including prickly pear cactus extract, wheatgrass, chugging two glasses of water before bed (it can’t hurt!), tomato juice with cayenne pepper, sugar, and lime, Tiger Balm to treat headaches from hangovers, soaking in Wasabi to detoxify, sitting in a mustard bath, and reflexology to cure a hangover through the hands and feet.

Cultural remedies around the world?

There are some interesting hangover cures and traditions from around the world, usually consisting of what you eat the next morning. In Mexico they tell you to eat spicy shrimp, possibly with a bloody beer (beer with Clamata and tomato juice), in Germany it’s pickled herring, in Japan pickled plums, tripe soup in Romania, and we load up on coffee and greasy food in the U.S.

What about a “hair of the dog” theory?

Drinking alcohol to get rid of a hangover is like trying to jump in a pool because you don’t want to get more wet, but the crazy thing is, it does provide relief for some people. But that relief is very temporary and only because the new infusion of alcohol dulls the senses and masks the symptoms of your hangover, not eliminates them.

So what’s the #1 way to reduce your hangover?

The only consensus among scientists, researchers, and heavy drinkers alike is that filling your stomach before you drink really helps how you feel the next day. Eating a big meal before a night of beverages slows down the absorption of ethanol through your intestines and therefore helps diminish the hangover. Food doesn’t “soak up” the alcohol like some people say, but it will slow down the rate of absorption and only you to process the alcohol more easily and with less enzyme and chemical imbalances.

But to answer that question, the #1 way to reduce a hangover is to drink less the night before!